DON'T EVER GET OLD is out


The critics loved it and now, you can too.  Here are some reviews:

Kirkus (starred): "The real prize here, however, isn’t Nazi treasure but Buck’s what-the-hell attitude toward observing social pieties, smoking in forbidden venues and making life easier for other folks. As he battles memory loss and a host of physical maladies, it’s great to see that he can still make whippersnapper readers laugh out loud."

Booklist (starred): "a knockout of a book"

Library Journal (starred): "Short chapters, crackling dialog, and memorable characters make this a standout
debut. With his curmudgeonly lead, Friedman ensures his intergenerational detective story maintains a pitch-perfect tone. The underlying theme of revenge balances a wacky plot that evokes Elmore Leonard."
You can buy it at:


BookPage Magazine (Top Pick): "Schatz is an anachronism: a chain-smoking Lucky Strike addict; a Luddite to a fault; cranky and crotchety at every juncture. He is also wickedly funny and full of pithy homilies. Don’t Ever Get Old is just about as good as debut mysteries get."


Library Journal's "Books For Dudes": Buck transcends masculinity in favor of manliness...If you don’t like this book, there’s something wrong with you."


Criminal Element "Fresh Meat:  "This book reflects back to a serious and dreadful time in world history and yet, Buck is so funny in his approach to life, that I laughed my way throughout. For the sheer joy of it, I re-read the part where Buck and Tequila are in the bank, trying to open the safety deposit box, three or four times. It was that irresistible."


You can read the first chapter here


And you can buy it at these places:

Or at your local independent bookstore, which I recommend, because DON'T EVER GET OLD is a SIBA Okra Pick.

Here is an ad about how all four trades gave the book starred reviews: 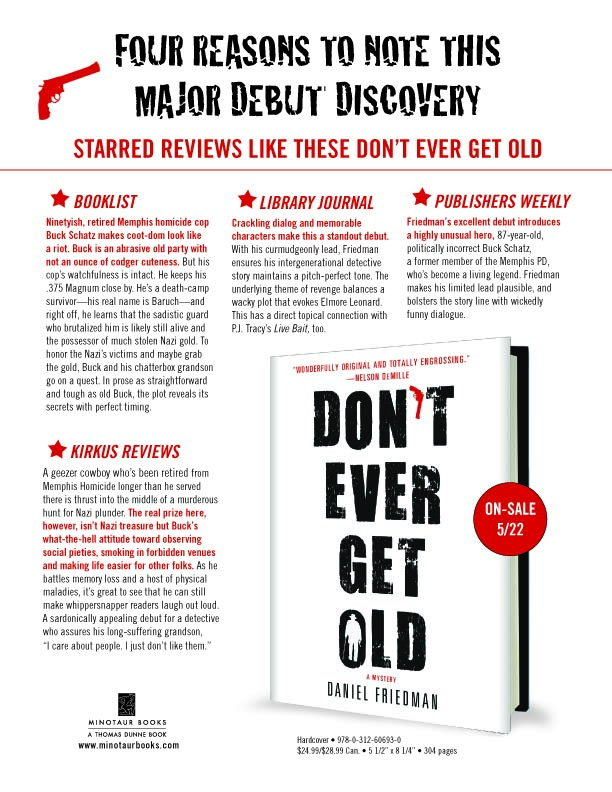