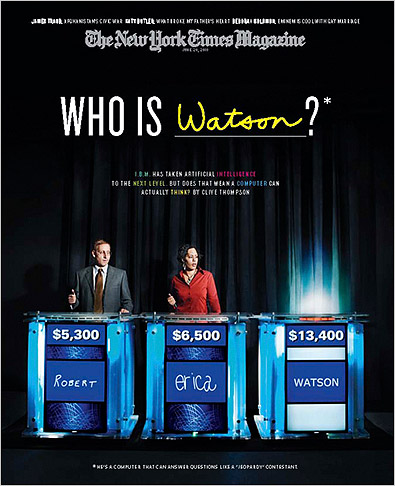 There is a fascinating article in the New York Times magazine about IBM's quest to develop a supercomputer that can win at "Jeopardy!"  It seems like a simple task, since computers have access to vast databases.  But it is difficult for computers to parse the strange and obtuse question prompts that are routine on the game show.

But they've done it.  And there is even a sample game on the Times' website where the computer will take you to school.  I beat Watson, but I am smarter than you.

How did IBM do it?  Well, it turns out, the secret to "Jeopardy" is that upwards of seventy percent of the questions on the show are related to the 1989 Tone Loc song "Funky Cold Medina."  The break came from legendary "Jeopardy!" champion Ken Jennings, who revealed to IBM's engineers that the trick to his 74 "Jeopardy!" wins was that he buzzed in on every question and blindly answered "Who is Tone Loc?" or "What is the Funky Cold Medina?"  Jennings's anecdotal evidence was supported by a comprehensive statistical analysis of the show, which established that this is actually a dominant strategy for the game.

This revelation is the most earth-shattering development in trivia-game analysis since the 2002 discovery that the Trivial Pursuit Genus Edition had only six correct answers: "John F. Kennedy," "Adolf Hitler," "Some Like It Hot," "The Baltic Sea," "Wayne Gretsky" and the number four.

Email ThisBlogThis!Share to TwitterShare to FacebookShare to Pinterest
Labels: Funny