This isn't ordinarily my style, but I know these things are popular, and I need more blog hits so I can feel like I have friends.
I am a BlackBerry user, so I am a big fan of iPod standalone music players.  I like to be able to sync my device into iTunes and I prefer to have a sleek music device to carry when I run or work out, instead of using my phone to listen to music.  I don't want to carry something like the iPod Touch along with my BlackBerry, so I am a fan of the iPod Nano.  This morning, I picked up the latest generation of the device at the 5th Ave. Apple store.
Apple cut the size of the Nano roughly in half compared to the previous model. The video playback function, which has been a nano staple since the third-gen device, has been removed; this thing now just plays music.  Apple has replaced the click-wheel interface with a multitouch screen.
Here are pictures of the packaging: 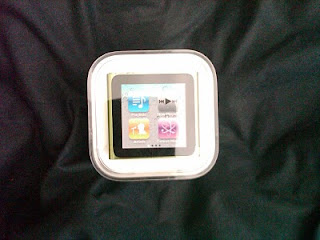 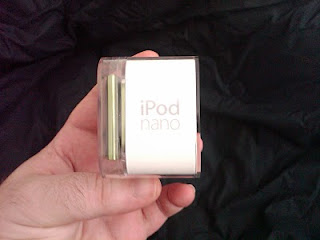 As you can see, the Nano is now very small; nearly as small as the iPod Shuffle.  This thing has come a long way since the iPod Mini. 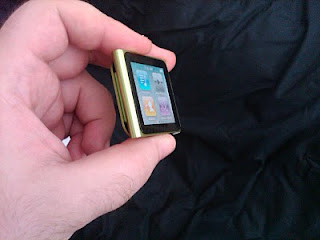 This is the new Nano compared to my 4th-gen model.  As you can see, it's much smaller, and about half the weight.  However, some of that size reduction has come at the expense of screen real-estate.  Also, since the interface is now multi-touch, you have to select albums or songs with a finger, so each name or title in your list of artists or albums has to be larger.  That means that, while the old Nano could display ten names on its screen at once, the new device can only display three.  For what it's worth, though, the multitouch display is very responsive. 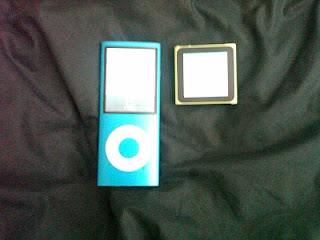 This photo shows the profile of both devices.  Apple has added a clip onto the back of the device which is convenient for working out, but it adds a little bit of thickness. 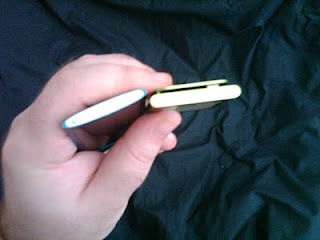