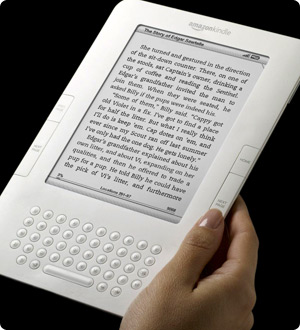 Amazon announced its sales of e-books have outpaced hardcover book sales, at a ratio of 1.43 paid Kindle books per hardcover sold.

As is usual with information not required in corporate disclosures, this information is a little bit vague.  Apple's iPad sold 3 million units in 80 days, while Kindles sold 3.7 million in the entire year.  But Apple claims only 20% of the e-book market, while Amazon notes that it sells about three quarters of all James Patterson e-books, for whatever that information is worth.

Note that the ratio is calculated in a manner favorable to Amazon's boasts of robust e-book growth; the numbers are in books sold, rather than revenue.  Amazon is also measuring sales for its the entire e-book catalog against hardcovers, instead of comparing sales on a title-by-title basis.

Hardcovers are prominent titles backed by current marketing pushes, so they sell a lot of copies.  But they're a pretty small proportion of the total number of titles in the bookstore.  Amazon stacked hardcover sales up against e-versions of the same titles, at lower prices, and e-versions of every book originally published in trade or mass market paperback format, and books published only in electronic format, and e-versions of older bestsellers that are no longer selling in hardcover.  Amazon excluded free e-books from the calculation, but 80% of Amazon's e-books are $9.99 or less, while hardcovers tend to cost $15 or more. And paid Kindle books include a lot of titles priced lower than $3 and often as low as $0.99.

If Amazon were to compare overall sales (instead of only its own sales) of bestselling hardcovers to electronic versions of the same titles, the numbers would show that hardcover books are the dominant format and e-books remain a small slice of the pie.

Many analysts believe Apple is poised to crush Kindle, and that e-books will grow by piggybacking on multipurpose technologies.  I'm skeptical of this myself; people buy Kindles to read books on, but they buy iPads for numerous other things, and, unlike dedicated reader devices, the iPad's ergonomics and screen are not designed specifically for book reading.

The reading experience on the iPad is severely adulterated because the screen is backlit, and therefore difficult to look at for long periods; people will not want to read on iPads for the same reasons they don't want to read books on their computer screens.  The iPad, with its powerful processor and backlit LCD only lasts ten hours on a charge, so you can't take it on a camping trip or a beach weekend unless you bring a charger.  The iPad screen is also hard to read in direct sunlight.. Kindle can go weeks on a charge, and traditional books are an astonishing technology that never needs to be plugged in.

Amazon made e-books attractive by paying publishers about $12.50 per e-book license, wholesale and selling them at a loss to customers for $9.99.  But, as the profit margins on reader devices fall, vendor subsidies on book prices will disappear as well, and publisher pushback to Amazon's subsidized prices has brought about the agency pricing model, where publishers set prices and most bestsellers cost $12.99.

E-book sales have grown in an environment where the same content available in hardcover for $17 cost $10 on a Kindle.  But when e-books are $12.99 and hardcover books are around $14,  I think readers will mostly prefer paper, and paper will remain the dominant format for major-publisher releases, although low-priced e-book only releases will create a lot of opportunities for indie and niche titles.
Posted by Daniel Friedman on 7/20/2010