You are the tenth rabbit. 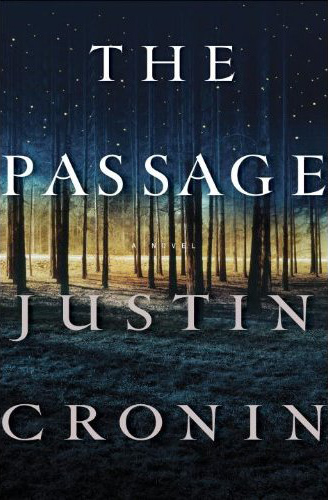 Justin Cronin's "The Passage" is a big deal right now.  It's tearing up the bestseller lists and Salon gushed over it for weeks.

It's about a vampire apocalypse, so it's got that going on.  Vampires are hot.  Apocalypses are hot.  And Cronin is an Iowa Writers' Workshop grad with the gift for taking far-out stuff very, very seriously and pulling it off.  As someone who instinctively goes for a laugh every second page, I admire and respect the ability to play things straight.

If my book had a convicted child-molester who witnessed his father's suicide and was required as a condition of his parole to take female hormones that shriveled his testicles to the size of raisins, there is no way I could play that for pathos.  Especially if the character's job was to sweep glow-in-the-dark poopie out of vampire cages.

It's easy, in retrospect, to take potshots at this book.  In over eight hundred pages of heart-on-its-sleeve weirdness, there are plenty of soft-spots for viral types like me to sink our needle-teeth into.  "The Passage" isn't as good as Cronin seems to think it is.  The subject matter never achieves the weightiness it clearly strives for.  Characters who are supposed to be lovable or mysterious don't make much of an impression.  Other times, extraneous background is explored unnecessarily, and the story stops for this purpose.  Later on, the disposition of certain characters make this backstory feel like wasted time; there's little reason to learn about the childhood traumas or romantic foibles of a character whose narrative purpose is to get eaten by a monster.

The book contains plot holes and loose ends that clearly and obnoxiously anticipate a sequel; a book that demands this much time investment from a reader should feel more complete as a story.

But I still read the whole damn thing in less than a week, and I stayed up later than I should have to do it.  And now, I want to talk about it.  So if "The Passage" doesn't find a place in the literary canon, it's still compelling in its odd, sincere way, and I guess I recommend it.

Over the next couple of days I am going to pick this book apart, and talk about all the things that don't work, because exploring the stuff that is wrong with "The Passage" is potentially useful as an object lesson for writers who are interested in discussing the more abstract elements of character development and structure.  But today, I want to highlight a couple of things Cronin does really well.

I'll throw a jump on the post, to hide the spoilers for people who might want to read the book.  That means (in case it isn't obvious) that you have to click "read more" below in order to read the rest.


While I will talk about Cronin going overboard with his character development in later entries, when he exercises a light touch, the guy is really awesome.

In the first chapter (which I disliked generally), there is a really nice moment for Jeanette's father, a very minor character.  He has been angry because his daughter got pregnant out of wedlock, and she won't tell him who the baby's father is.  But he shows he forgives her by helping her put together a nursery in his house, and by hanging a wallpaper fringe in the baby's room.

That's just a fantastic detail.  I never would have thought of the wallpaper fringe, but the fact of it, and of this guy hanging it in that room just really draws him in there.  This character doesn't even get a first name, and he's dead a couple of pages later.  But that one moment is a textbook example of how to make a minor character seem human and three-dimensional with very little investment.

James Wood, I think, would approve.

Similarly, I really liked the introduction to Agent Wolgast in Chapter 4.  The backstory and motivation for this character is complex; his marriage fell apart after their baby died of a congenital defect.  Now his wife has remarried and is pregnant with her new husband, and Wolgast is alone and miserable.

Cronin deftly introduces these elements as subtext rather than spelling then out as exposition; Wolgast gets drunk and phones his ex-wife from his motel room in the middle of the night, resulting in an emotional outburst and some nastiness with the new husband.

Eventually Cronin rakes over Wolgast's back-story too much, and delves into it at inopportune times, culminating in a bizarre decision to flashback to Wolgast's first date with his ex-wife in the middle of the vampire apocalypse.  But in Chapter 4, these elements are handled with restraint, and there's a real sense of immediacy and emotional heft to the circumstances in which we start to learn these details.

Wolgast's job is to recruit death-row inmates to be vampire test subjects, so this drama also grounds something that might otherwise be kind of ridiculous.

Finally, in Chapter Five, there's a scene where Richards is playing Free-Cell.  Richards is a stereotypical bad-ass scorched-earth mercenery villain character, straight from central casting.  He's pretty much the same character as the villain in "Avatar."  Later on he murders nuns for no reason except that he is in danger of becoming likable.

But in Chapter Five, he plays Free-Cell, and it's brilliant.  He's sitting in his office with all the security monitors showing him the various nooks and crannies of the top secret vampire research facility, and he's systematically trying to break every single one of the ninety-six thousand hands of Free-Cell, and fuming with rage about some kid who claims to have accomplished the feat.

This is a perfect character moment.  It's such a great observation; it reaches deep into the character's motivation with a single anecdote, but it leaves enough mystery to keep him a little bit inscrutable.  Cronin, despite his various other flaws, must be some kind of a genius for coming up with this; he knew he needed something to keep the character from becoming a cartoon, and he figured out how to do it.  It's a great observation that's clever and feels real.

That little bit of believability anchors a whole lot of the absurdity inherent to the idea of the secret vampire research facility Richards is guarding. As a character development exercise, I'll take Richards and his Free-Cell over Grey's dead father or Lear's dead wife or Wolgast's dead baby any day of the week.
Posted by Daniel Friedman on 7/14/2010