Fantasy and sci-fi need to be grounded by rules.  Precisely because characters in these genres have magical powers and encounter mythical creatures, their abilities need to have clearly defined constraints.  We don't want to feel cheated when characters arbitrarily have new and never-before-seen powers to extricate them from plot problems.

Perhaps the most famous example of this kind of cheating is the movie Superman II, in which Superman had a magic kiss of forgetting.  However, Laurell K. Hamilton's popular Anita Blake series has also been criticized for regularly giving its protagonist new superpowers to get her out of jams.  This stuff isn't good; it's difficult for readers to invest in conflict if they know that the character is probably just going to solve any plot problems that arise by shooting heretofore-unmentioned laserbeams from her fingertips or blowing stuff up with her mind.

"Damn right, I have a magic kiss of forgetting.  I'm friggin' Superman."
We call this deus ex machina, which is Latin for "God from the machine."  The term refers to a convention of classical theater, in which plot problems were resolved by the sudden entrance of a deity into the story.  However, in practice, it refers to any solution to a plot problem that emerges from outside the narrative.  It is, in some ways the inverse of the well-worn rule about Chekov's gun; the rule that a gun hanging above the mantel in Act 1 must go off in Act 3.  It is similarly true that, if you want the character to be packing heat in Act 3, you should establish the gun in Act 1.
Grounding something organically in plot is structurally simple; James Bond swings by the Q-Branch lab at the beginning of the movie, and Q demonstrates some new exploding cufflinks.  Later on, when the villain thinks Bond is disarmed, we realized that Bond is still wearing the cufflinks.  Bond will then proceed to use the cufflinks blow shit up.  We understand where the cufflinks came from, so this is logical.
Compare and contrast:  There are no cufflinks.  When Bond is captured, he suddenly announces he has magic powers and starts blowing things up using psychokinesis or something.  This is deus ex machina.
Vampire fiction has a long and dubious history of bending its own rules and loopholing its central premises.  Vampires are sexy and readers love them, but their pesky problems with daylight and their inconvenient need to drink blood all the time makes it hard to write plots about how they are glamorous bad-boy romantic heroes with awesome superpowers and no drawbacks at all, whatsoever.
Twilight gets bashed a lot for its blasphemous sparkles, but beloved Buffy the Vampire Slayer struggled with similar problems, and the Buffy writers were fond of ridiculous, illogical solutions. Vampires could buy blood at the supermarket in takeout soup containers.  Every building in Sunnydale was connected by convenient, easily-accessed sewers, so vampires could get around during the day.  Failing that, they could run around with blankets over their heads. 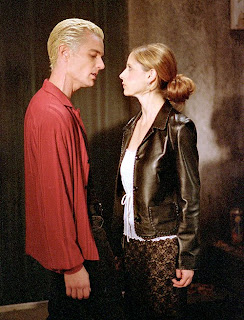 "I could never love you, Spike.  You smell like doody."
After the jump, more spoilery stuff about Justin Cronin's The Passage.

The Passage runs into similar problems, because it tries to split the difference between mystical, supernatural vampires and biologically-engineered sci-fi vampires, and ends up muddling its mythology.

For example, Lacey the nun shows up at the secret government vampire facility just as the vampires escape their cages.  There's no way she could have found this place or even known of its existence, except she says she was guided by the voice of God.


Agent Doyle has apparently been hearing the same voice, since he knows she's coming even though he only met her once and he's been locked for weeks in an underground prison cell.
But if God is in the machine, using His divine GPS to move the characters like pieces on a chess-board, you'd think He might bother to stop that whole vampire apocalypse.  Maybe we're supposed to think He's in on it; there are a lot of allusions to Noah and the Biblical flood.  The Deity is apparently really pissed about Jenna Bush getting elected governor of Texas.
On a similar note, if the vampires are created by a virus, how does that give them powers to telepathically manipulate people's dreams?  Cronin wants his vampires to be mystical and inexplicable, and to inhabit the shadows around the subconscious yearnings of his damaged characters.   But he also wants the vampires grounded with a semi-plausible origin that references topical fears about genetic engineering and biological warfare.  So they are created by a mad scientist from viruses in an army-funded lab.  I don't think Cronin can have it both ways.
Authors like Max Brooks and Charlie Huston have firmly planted their zombies and vampires in something resembling a biological reality.  This requires demystifying the monsters and establishing the rules of what they are and how they work.  A zombie infestation or a Vampyre Vyrus thus become practical obstacles with clearly defined parameters for characters to deal with, rather than the cryptic Rorschach blots Cronin wants his critters to be. But the authorial decision to keep all the options open works to the detriment of the story.  If we don't know what the vampires can do and we don't know what the super-powered protagonists can do, then the stakes are vague.
Messianic Amy is a real problem in this sense.  She is, perhaps, intended to be mysterious, but she falls into that Anita Blake trap of seeming like a Swiss-army knife of a character, rather than a key to the story's lock.  Before the apocalypse, Lacey the nun takes Amy to the zoo, and the animals start acting crazy, throwing themselves against the bars of their cages.

Amy says this happens because they know "what I am."  This is thematic, of course; Amy's ultimate narrative purpose is to bring her "what I am" to the vampires' "what am I?" allowing the titular Passage to occur.  But if Amy knows these things, she doesn't reveal them to the other characters or to the reader, so the stakes of this existential conundrum are nebulous.  When Amy gives Babcock's Many their names back, it seems like a high-concept device, rather than a climax the book has been building toward.
And what is Amy, anyway?  Is she whatever she is when she goes to the zoo, or does she become what she is later because of the experiments Lear performs on her?  If she is an ordinary child turned into something else by Lear's experiments, the animals' behavior makes no sense.
But if Amy is something special already, and becomes more special as a result of Lear's super-serum, it seems like a ridiculous, arbitrary coincidence that she becomes Lear's test subject merely because Richards identifies her as the only abandoned child in the world with no paper-trail.  Is this the hand of the Divine?  Do we really need an interventionist God in this machine, with all the other shit that's going on?
And why don't animals ever act strangely around her again?  After the apocalypse she gets near cattle herds and rides a horse, and no odd animal behavior ensues.

These fantasy worlds have to be grounded in their own rules; it's difficult to accept a story where random things happen for no apparent reason.
Posted by Daniel Friedman on 7/16/2010