I'm too lazy to offer writing advice today, so I am going to talk about what I am eating instead.

You can buy beautiful juicy field-grown tomatoes at any grocery store or farmers' market in the city right now; August is their peak season and they're plentiful and cheap this year.  So I bought a bunch and made salsa.

This is actually a pretty simple recipe, but it's just fantastic (and cheaper by volume than the store-bought stuff).

You core about four or five tomatoes, depending on how big they are.  You throw the inside part of about a tomato and a half into the food processor to make your liquid base for the salsa, and you throw the rest of the cores away (or if you're like me, you just eat them).  You dice up the tomatoes, and you mix those with the liquid part.

You squeeze the juice from half a lime and a quarter of an orange over this.  Add a spoonful of olive oil and a little salt.

Then you add peppers, green onions and a handful of cilantro, either finely chopped or diced in the food processor.

Depending on how hot you want it, you can vary the kind of peppers you use, as well as the quantity.  The hottest part of a jalapeno pepper is the core with the seeds.  You can throw that part away if you want a mild salsa, or mix it in for medium. I use two whole jalapenos for salsa made from four large tomatoes.

If you're adventurous, you can get some habanero peppers, which are extremely hot.  I tried them once and thought they were unpleasant.

This is what you end up with: 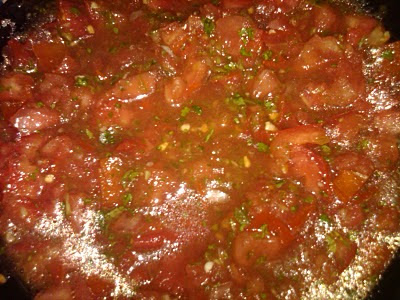 It beats the shit out of any store-bought salsa.  It's best if you let it sit for an hour or so after you make it, to let the tomatoes soak up the other flavors.  But you should eat it within a few days and keep it refrigerated.
Posted by Daniel Friedman on 8/27/2010